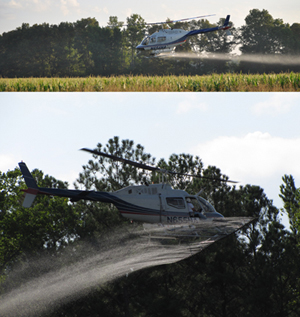 Helicopter Applicators, Incorporated performs a multitude of aerial applications. From fungicide to herbicide and insecticide, HAI has worked alongside government agencies as well as private industry to provide accurate and timely applications that meet our client’s needs. The majority of applications are performed with the aid of onboard navigational computers. Shapefiles are uploaded for the pilot to follow which greatly increases precision and allows for the job to be completed with minimal time and product wasted. For almost 50 years, HAI has applied products for the control of insects such as Gypsy Moth, Forest Tent Caterpillar, and Black Fly as well as applications of fungicide and fertilizer for row crops such as corn and soybeans. HAI also performs herbicide applications in a multitude of areas such as forestry, aquatic, right-of-way and anywhere there is undesired vegetation. 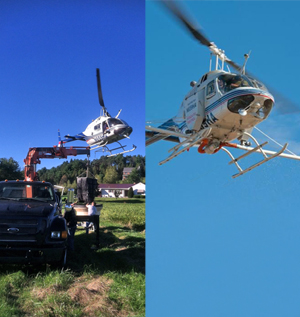 Helicopter Applicators, Incorporated utilizes both internal tanks as well as seeder buckets for dry aerial applications. One example of these would be for the control of mosquitoes with the application of larvacides. Another example would be cover-crop seeding where either the internal or external system could be utilized to spread clover, radish, wheat, and/or rye.

By utilizing various bucket systems, Helicopter Applicators, Incorporated has been instrumental in the rehabilitation of areas with planned erosion control projects on steep inclines. Our helicopters can quickly and safely maneuver in any area where a ground-based hydromulching system cannot reach. Along with aerial hydromulching, HAI has the ability to spread lime, and sling in supplies for ground crews to spread. Aerial spreading is both fast and economical. 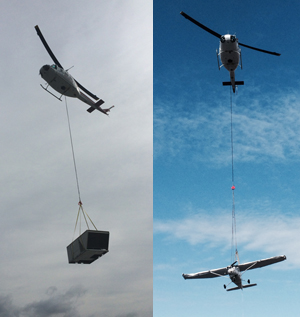 Helicopter Applicators, Inc. offers lifting capabilities up to 3,500 pounds by utilizing its fleet of various helicopters. We can meet the lifting requirements for construction projects to recovery operations, doing so in a safe and cost effective manner. Our pilots have experience working in a variety of environments from wide open spaces to confined, tight areas. 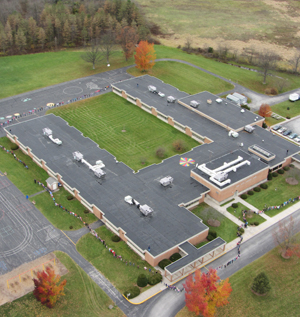 Helicopter Applicators, Inc. can provide an aerial platform for your professional photography needs. 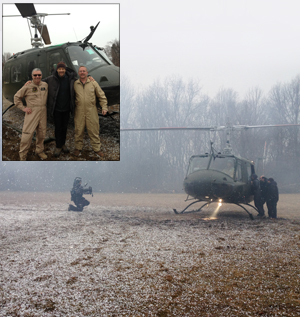 HAI has provided static displays as well as flyable aircraft for motion pictures and television series. Working closely with production, we have provided aerial coordination for films such as Shadow Conspiracy, starring Charlie Sheen, and TV series such as Zero Hour, starring Anthony Edwards.